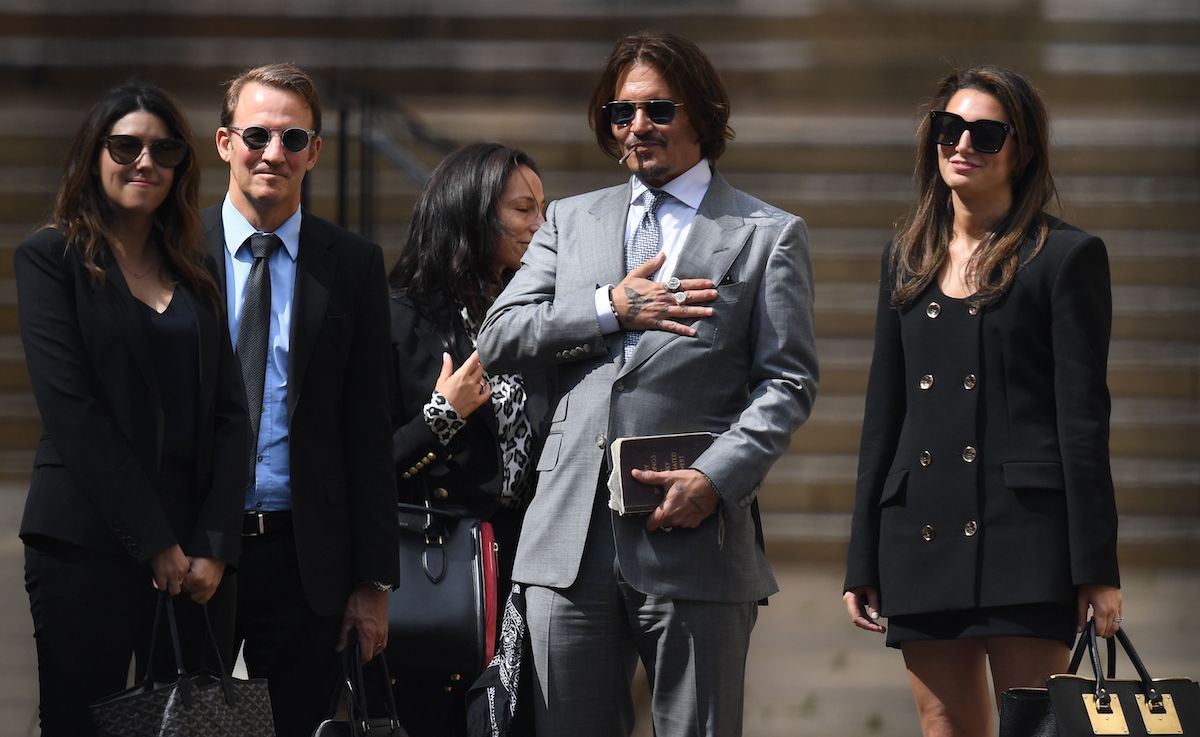 Johnny Depp’s legal team did some powerful maneuvering to win his case. In this post, we’ll look at another essential component of their strategy – the use of “DARVO.”

Reactions to the Verdict

After the verdict was rendered and in the days since, there have been shocked reactions throughout mainstream media and academia.

Here are some samples of those reactions:

– “In the U.S. Court system where we’re supposed to be very skeptical about defamation plaintiffs, he manages to win. It doesn’t make any sense at all.” – Mary Anne Franks, a law professor at the University of Miami who teaches about the intersection of the First Amendment and technology, to Politico.

– “The longer you look at it, the weirder the jury’s verdict in the Depp-Heard case looks – even if you assume Heard lied constantly. The sentences from her op-ed that were at issue were phrased so carefully and vaguely that it’s hard to see how a jury found them defamatory.” – James Surowiecki, author of The Wisdom of Crows and a former columnist for New Yorker magazine.

– “And of course, nothing even close to malice was established. Not by any stretch.” – Michelle Dauber a Stanford University Law Professor.

– A.O. Scott, writing for the New York Times said, “Even before the verdict came in, Depp had already won. What had looked to many like a clear-cut case of domestic violence had devolved into a ‘both sides’ melodrama.”

Why are so many questions being raised if the jury’s verdict makes perfect sense?

Mark Stephens, an international media lawyer familiar with both cases, told the Washington Post: “Depp’s legal team in the United States ran a strategy known as DARVO…. We find that DARVO works very well with juries.”

The term “DARVO” refers to a reaction that perpetrators of wrongdoing…may display in response to being held accountable for their behavior. DARVO stands for “Deny, Attack, and Reverse Victim and Offender.” In utilizing this strategy, the perpetrator or offender may Deny the behavior, Attack the individual doing the confronting, and Reverse the roles of Victim and Offender such that the perpetrator assumes the victim role – and the true victim or whistle blower becomes the alleged offender.

The term DARVO and the analysis supporting it were created by Jennifer Freyd, Ph.D., an expert in trauma and disassociation, and a professor at Oregon University and the Stanford School of Medicine. In 2020, Dr. Freyd and Sarah Harsey showed that observers presented with accounts of abuse followed by a DARVO response were less likely to believe the victim.

The DARVO acronym may seem novel, but the approach is not, especially as it relates to politics.

Roger Stone, Donald Trump’s long-time political advisor, has been using DARVO-style tactics in his political consulting work for decades. Stone described this in a 2008 Jeffrey Toobin-authored profile of him in The New Yorker. What he referred to as a primary tenant of “Stone’s Rules,” while promoting his forthcoming book “Stone’s Rules for War, Politics, Food, Fashion, and Living,” was really just an early delineation of DARVO (The book was not published until 10 years later under a slightly different title, “Stone’s Rules: How to Win at Politics, Business, and Style).

It would appear this is a strategy that former President Donald Trump embraced throughout his political career, presumably something Roger taught him.

An early example is a statement Trump made on Twitter at the beginning of his presidency. “This is the single greatest witch hunt of a politician in American history!”  – which was his response to the appointment of Robert Mueller as a special prosecutor assigned to investigate the allegations of Russian Collusion (later to be known as “Russiagate”) with the Trump campaign.

Trump went on to repeat this statement over and over to the media – and at rallies he held throughout the country to galvanize his supporters.

On June 9, 2022, the January 6th House Select Committee Hearing Co-Chair, Rep. Liz Cheney told the public, “You will see that Donald Trump and his advisers knew that he had, in fact, lost the election. But despite this, President Trump engaged in a massive effort to spread false and fraudulent information to convince huge portions of the U.S. population that fraud had stolen the election.”

Loosely analogous to DARVO, the “offense” Trump committed was losing the presidency for the Republican Party. But by falsely claiming he was a victim of a stolen election, he reversed positions with the Democratic party and painted them as offenders. Huge portions of the population became incredibly sympathetic to Trump as a result of this tactic

On May 27, 2016, Amber Heard filed for a Domestic Violence Temporary Restraining Order against Johnny Depp based on an incident that took place six days prior (This incident was widely discussed during their trial). The judge granted the restraining order – and the court documents were obtained by People magazine, which immediately reported on it.

In response to the court, Johnny’s attorney, Laura Wasser, said, “Amber is attempting to secure a premature financial resolution by alleging abuse,” and nothing else. She did not mention that it was he who was the victim and Amber the offender, nor did Johnny comment on Amber’s abuse allegation or his own victimization to People magazine.

The following week, Amber appeared on the cover of People magazine – and Johnny continued to make no comment.

Johnny did not allege abuse by Amber but clearly, he was angry with her. On August 13, 2016, he sent the following text message regarding Amber to his sister, Christi: “I am disgusted I ever touched that scum…. I am back on Tuesday and then…. Court!! Will hit you when I get back, doll…. Come over for a spot of purple and we’ll fix her flabby ass nice and good. Love, J” (See Defendant’s Exhibit 844)

Two days later, Johnny sent the following text message to Christi and his agent, Christian Carino: “She’s begging for global humiliation and she’s gonna get it.”

The text continued, “But she sucked Mollusk’s crooked dick and he gave her some shitty lawyers. I have no mercy, no fear and not an ounce of emotion, or what I once thought was love for this gold-digging, low-level, dime-a-dozen, mushy, pointless dangling overused flappy fish market….I’m so fucking happy she wants to go to fight this out!!! She will hit the wall hard!!!”

He finished with, “I can only hope that karma kicks in and take the gift of breath from her… Sorry, man… But, NOW, I will stop at nothing!!! Let’s see if mollusk has a pair. Come see me face to face… I’ll show him things he’s never seen before… Like, the other side of his dick when I slice it off.”

Curiously, however, the next day on Tuesday, August 16th, the day before a hearing on Amber’s restraining order against Johnny was to take place in court, Johnny and Amber settled their divorce and released a joint statement. Johnny was still represented by Laura Wasser, arguably the most famous and accomplished divorce attorney in the United States, who has also represented Kim Kardashian, Maria Shriver, Angelina Jolie, and many other celebrities.

The statement read: “Our relationship was intensely passionate and at times volatile, but always bound by love, neither party has made false accusations for financial gain. There was never any intent of physical or emotional harm.”

And that was that – or so it seemed.

Two years later, in June 2018, Johnny appeared on the cover of Rolling Stone magazine for a wide-ranging profile titled “The Trouble with Johnny”. Although Johnny mentioned Amber and vehemently denied he ever abused her (he showed the reporter a tattoo he had changed from “slim” Amber’s nickname to “scum”), he did not mention anything about Amber having abused him. The primary focus of the article was his lawsuit against his former financial managers.

The first time Johnny alleged (publicly) that Amber had abused him was in filing his libel lawsuit against The Sun newspaper in the UK.

It’s amazing what a change in strategy (and attorneys, after Johnny fired Laura Wasser) can do when a party is looking for a better outcome. Instead of defending the allegations by denying he was an offender/abuser, Johnny added that not only was he not the abuser, but he was also the victim.

Yet, Johnny still lost The Sun libel case despite this change in strategy.

That case was decided by a judge who rendered a 129-page analysis of all the evidence and testimony presented by Johnny and Amber, concluding that accounts of 12 incidents of alleged abuse by Johnny were “substantially true”.

While international media lawyer Mark Stephens said, “DARVO works very well with juries” he also said, “It almost never works with Judges who are trained to rely on evidence.”

When asked why Johnny lost the UK case but prevailed in Virginia, George Freeman, executive director of the Media Law Resource Center, said: “The answer is simple, it was up to the jury.”